Boku no Hero Academia is a story about the universe where individuals with superpowers (called”Quirks”) would be the standard, Izuku Midoriya has dreams of one day getting a Hero, even though being bullied by his classmates for not having a Quirk. After being the only man to attempt to rescue his childhood bully Katsuki Bakugo out of a villain, All Might,” Japan’s best Hero, conserves Izuku and bestows upon his own Quirk”One For All”.This Was Just a Storyline, watch it if you haven’t.Check out the My Hero Academia Watch Order 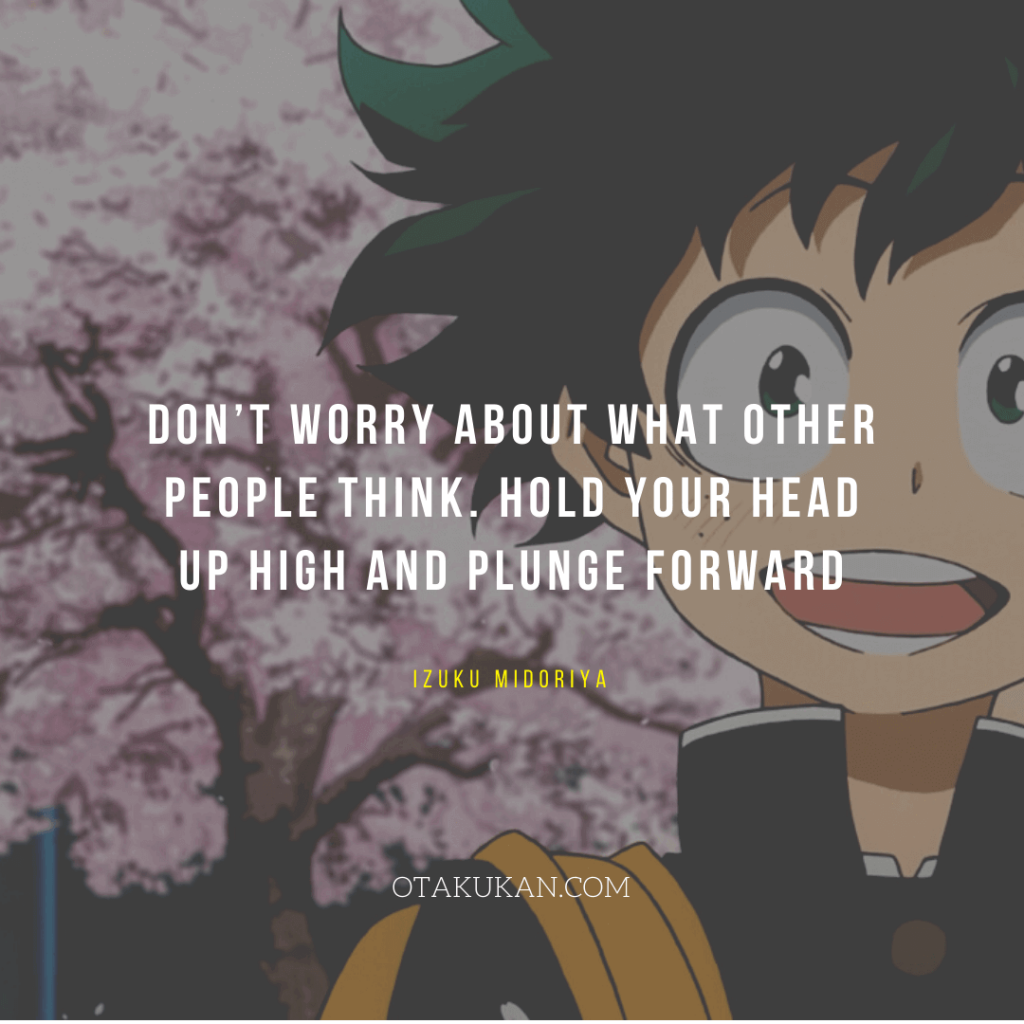 1.”Don’t worry about what other people think. Hold your head up high and plunge forward.”

2.“Sometimes I do feel like I’m a failure. Like there’s no hope for me. But even so, I’m not gonna give up. Ever!”

3.”All men are not created equal.” – Izuku Midoriya Quotes 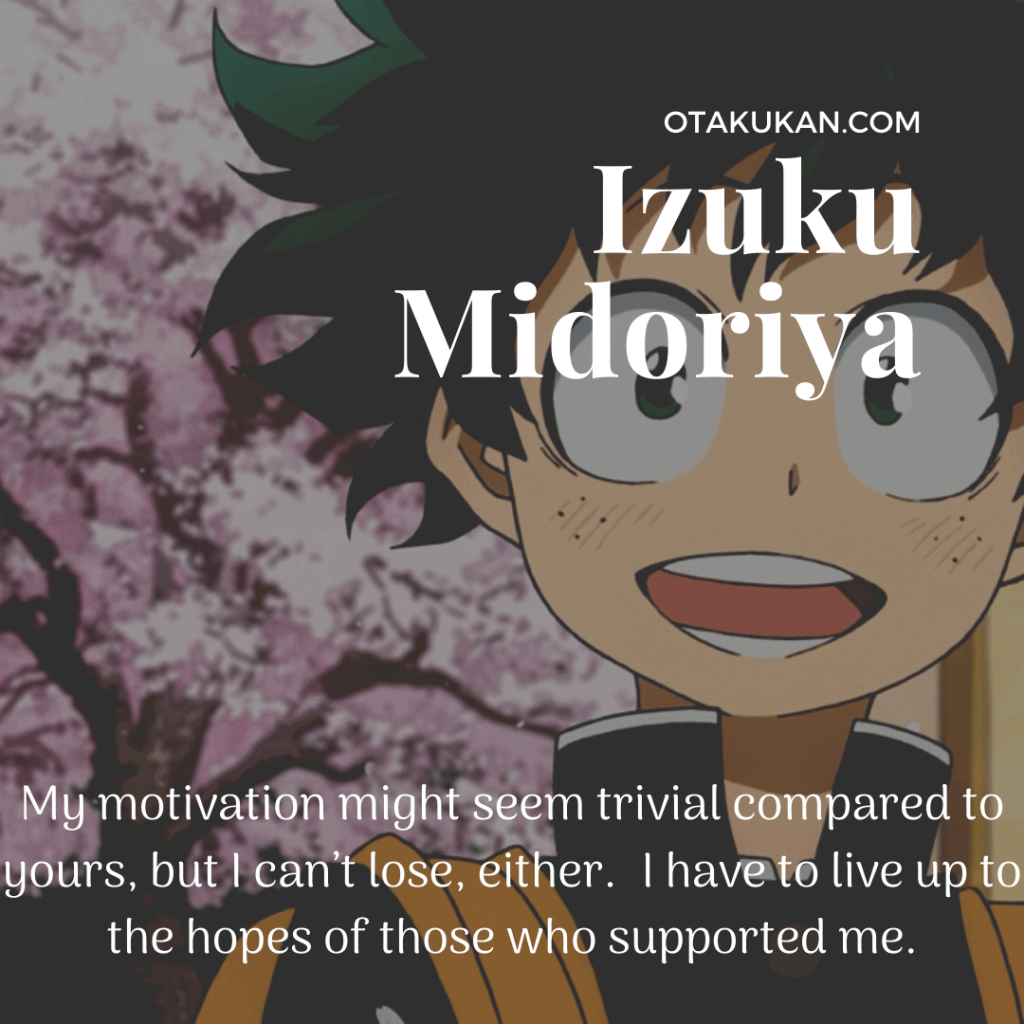 4.”My motivation might seem trivial compared to yours, but I can’t lose, either.  I have to live up to the hopes of those who supported me.” – Izuku Midoriya Quotes

5.“I have to work harder than anyone else to make it! I’ll never catch up otherwise… I want to be like you… Like you! The strongest hero.”

6.” The deeper the darkness the more dazzling the light shines!”

7.”I’m not gonna be your worthless punching bag-Deku forever… Kacchan, I’m… I’m the Deku who always does his best!”

8. “It’s like All-Might said… Giving help that’s not asked for… is what makes a true hero!” 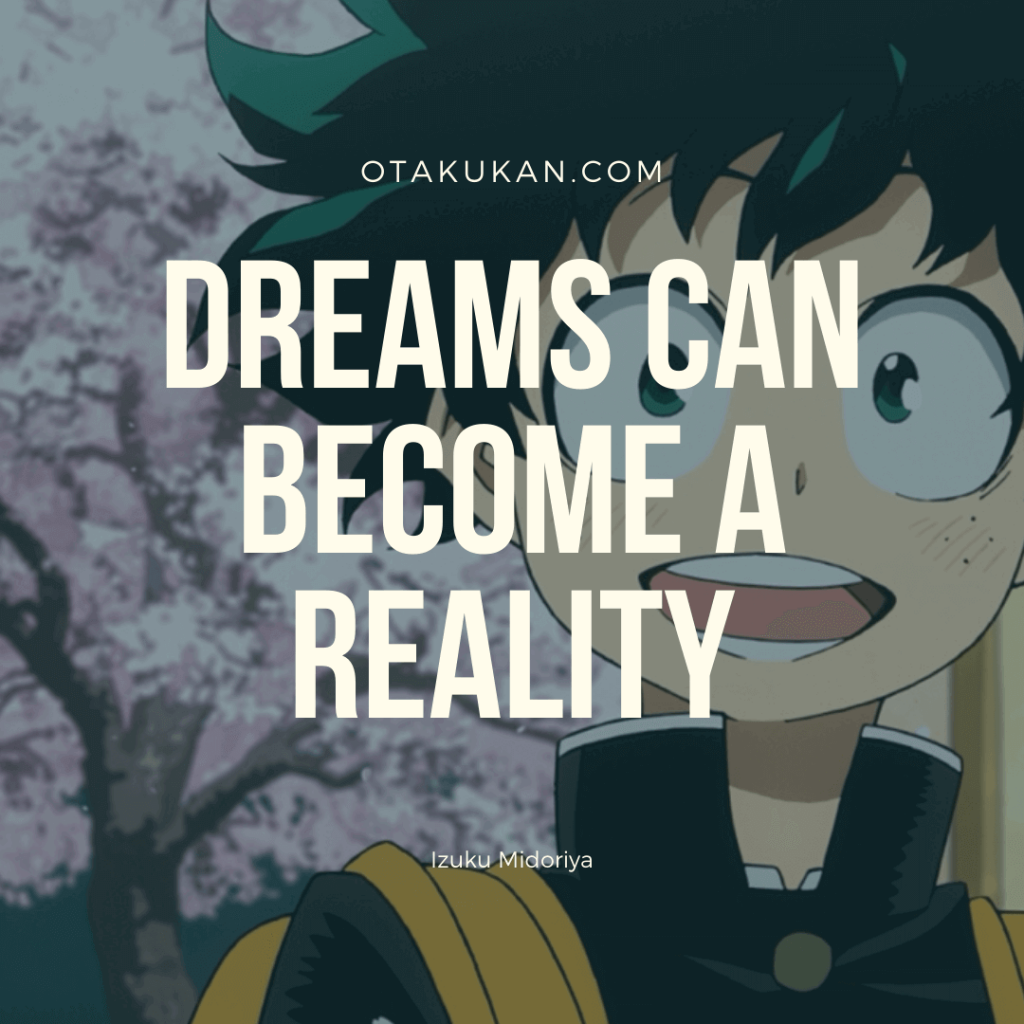 9.”Dreams can become a reality!”

10.” When the enemy becomes certain of their victory, that will be our chance.” – Izuku Midoriya

11.”A smiling, dependable, cool hero…That’s what I wanna be! That’s why
I’m giving it everything. For everyone!” – Izuku Midoriya 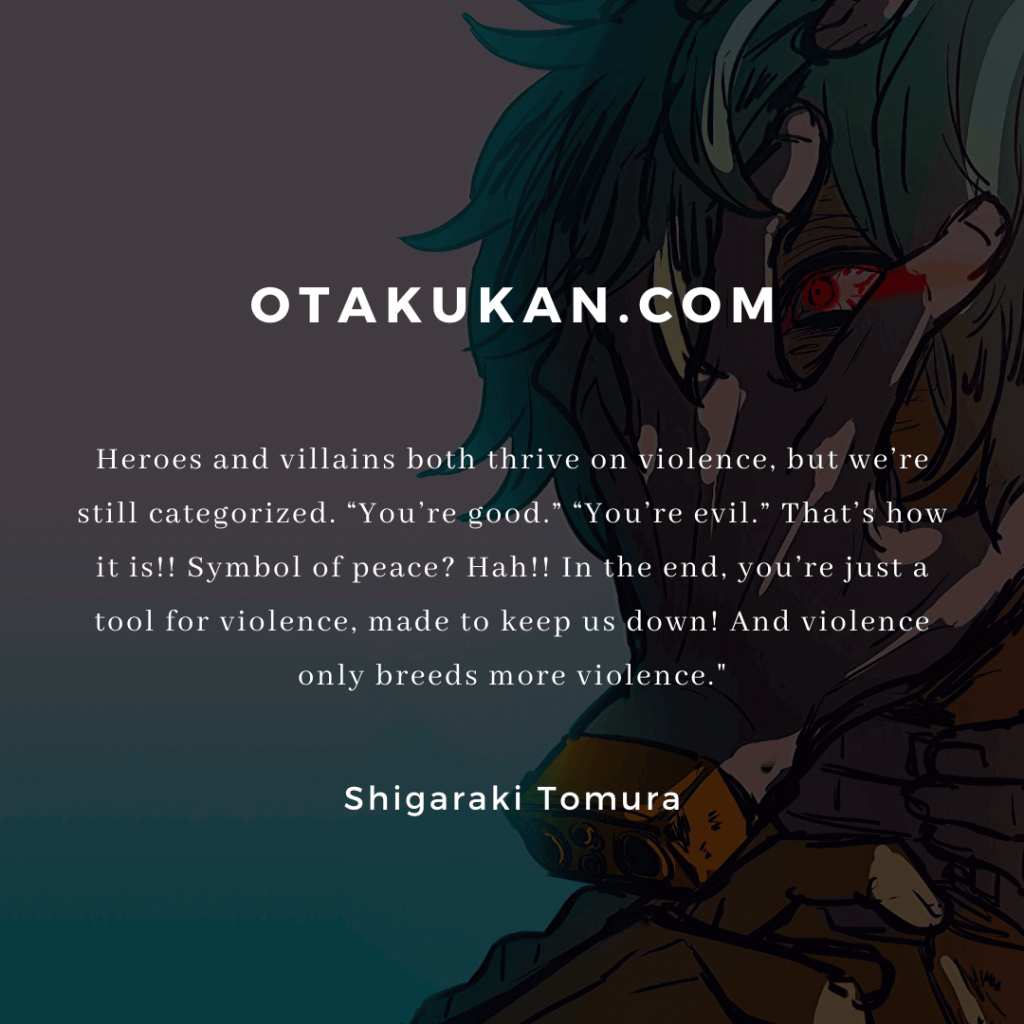 12.“Heroes and villains both thrive on violence, but we’re still categorized. “You’re good.” “You’re evil.” That’s how it is!! Symbol of peace? Hah!! In the end, you’re just a tool for violence, made to keep us down! And violence only breeds more violence.
” –Shigaraki Tomura Quotes

13.“Maybe I failed this time, but I’m not giving up. I’ll show them I’ve got what it takes to make it to the hero course, and I’ll become a greater hero than all of you.”

14.”The most inflated egos are often the most fragile.” – All Might

15.”It’s not bad to dream. But you also have to consider what’s realistic.” – All Might Quotes

16.” Whether you win or lose, looking back and learning from your experience is a part of life.”

17.“If you feel yourself hitting up against your limit, remember for what cause you clench your fists! Remember why you started down this path, and let that memory carry you beyond your limit.” -All Might Quotes

18. “When there’s nothing to be gained, rising to the challenge at those times, is surely the mark… of a true hero!”

19.“The slight difference between those who always aim for the top and those who don’t, it’ll come to matter in a big way once you all emerge into society.”

21.”Should we have let people die, all in the name of the law? Isn’t it a hero’s job to save people?” – Shoto Todoroki Quotes

22.“If you wanna stop this, then stand up” Because I’ve got one thing to say to you. Never forget who you want to become!”

23.“Ever since your brother got taken down…I’ve had my eye on you. Because all that building resentment was written over your face. I know that when I see it. And I know just how much grudges like that… can cloud a person’s vision.”     -Shoto Todoroki Quotes

24.” Wanting to do it and being suitable for it are different issues.”  -Iida Tenya Quotes

25.”They’ve been exposed to the outside world, up close and personal. They’ve had that fear planted in them. And they’ve endured it. Overcome it. Each has grown from that experience. And forgotten how to hesitate.” – Shouta Aizawa Quotes

26.”If you’re going to become a hero, you don’t have time for such leisurely events.” – Eraserhead Quotes

29. “You’ll regret making a fool of me… I’ll be freaking kill you! I’m taking the first to end all firsts. There’s no point in winning against some half-assed punk. No point If I can’t do better than Deku! So if you’re not trying to win, get the hell outta my face!” – Bakugou Katsuki

30.“Can’t stand morons like you who can’t get the damned point! Basically, you’re saying: “we wanna cause trouble, be our pal!” What a joke! I’ve always admired All Might’s triumphs. No matter what any of you jerks say, nothings ever gonna change that.”

These are some of the best My Hero Academia Quotes which you will love. 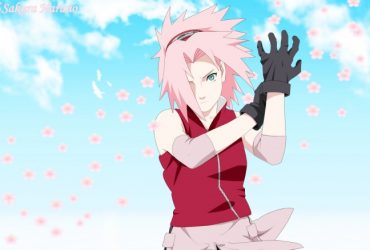 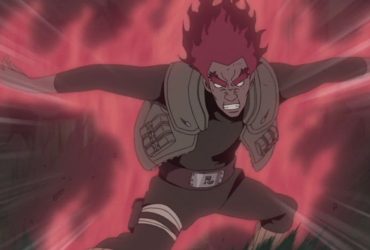