Obito was an Uchiha whose dream was of becoming Hokage. He Was a member of Team Minato, along with Rin Nohara and Kakashi Hatake. He Was sensitive Like Naruto, he helped many without any hesitation and had a crush on Rin Nohara.

During War times, Obito gets crushed under the Rocks to save Kakashi Selflessly!!, which leads him to Madara Uchiha. Madara Uchiha set up plans to kill Rin. So he could use Obito in his plan.

During all this time, there are various Obito quotes he said to Rin and Kakashi. We have listed some of the best Obito Quotes & Dialogues. These Obito Uchiha Quotes are Worth sharing. 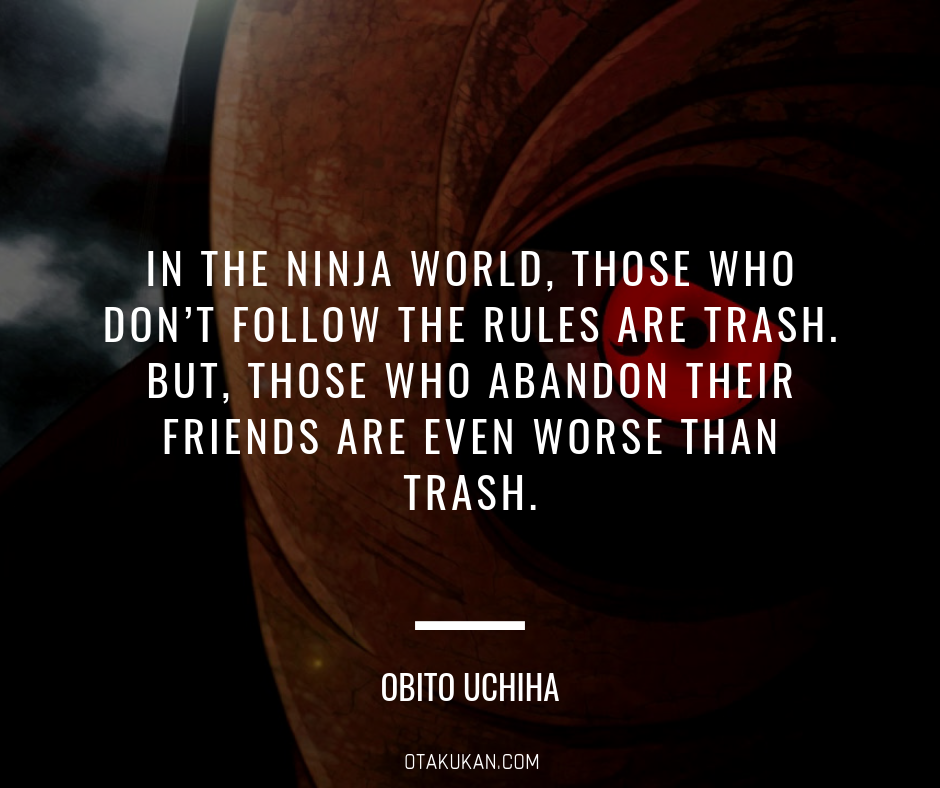 1.IN THE NINJA WORLD, THOSE WHO DON’T FOLLOW THE RULES ARE TRASH. BUT, THOSE WHO ABANDON THEIR FRIENDS ARE EVEN WORSE THAN TRASH. – Obito Uchiha

3. “In the ninja world, those who don’t follow the rules are trash. But, those who abandon their friends are even worse than trash.”

4.”I’m no one. I don’t want to be anyone. All I care about is completing the moon’s eye plan. This world is completely worthless. There is nothing left in it but misery.”  – Quotes by Obito Uchiha

5. “The moment people come to know love, they run the risk of carrying hate.”

8.“There is no such thing as hope! The concept of hope is nothing more than giving up, a word that holds no true meaning.”

9.“Look! There is nothing in my heart! I don’t even feel the pain!! You don’t have to feel guilty, Kakashi. This wind-hole was opened by this hell of a world.   -Obito Uchiha

10. Now I finally realized that faking one’s name and letting others do everything for you is different than entrusting something to one’s comrades. I’m not you. The current me is the one who wanted to become Hokage”  -Obito Uchiha Quotes