Itachi Uchiha is the older brother of Sasuke Uchiha. And was of the Uchiha Clan of Konohagakure and finally turned into a Konoha missing-nin. After leaving Konoha, he joined the Akatsuki in Naruto Series.

He used to have a best buddy named Shisui Uchiha, who died before him. He had also been considered a prodigy from the Uchiha because of his eye abilities and intellect.

At age 7, Itachi graduated from the very top class at the nin-academy of Konohagakure. In the beginning, he mastered his Sharingan attention at ten and turned into a Chūnin. He eventually became the leader of their own Anbu squad in 13.

This article shares some of the Best Itachi quotes and dialogues he said. These Itachi Uchiha quotes are relatable to Pain, failure, and love. Do check out these Itachi Quotes, which we have listed below: 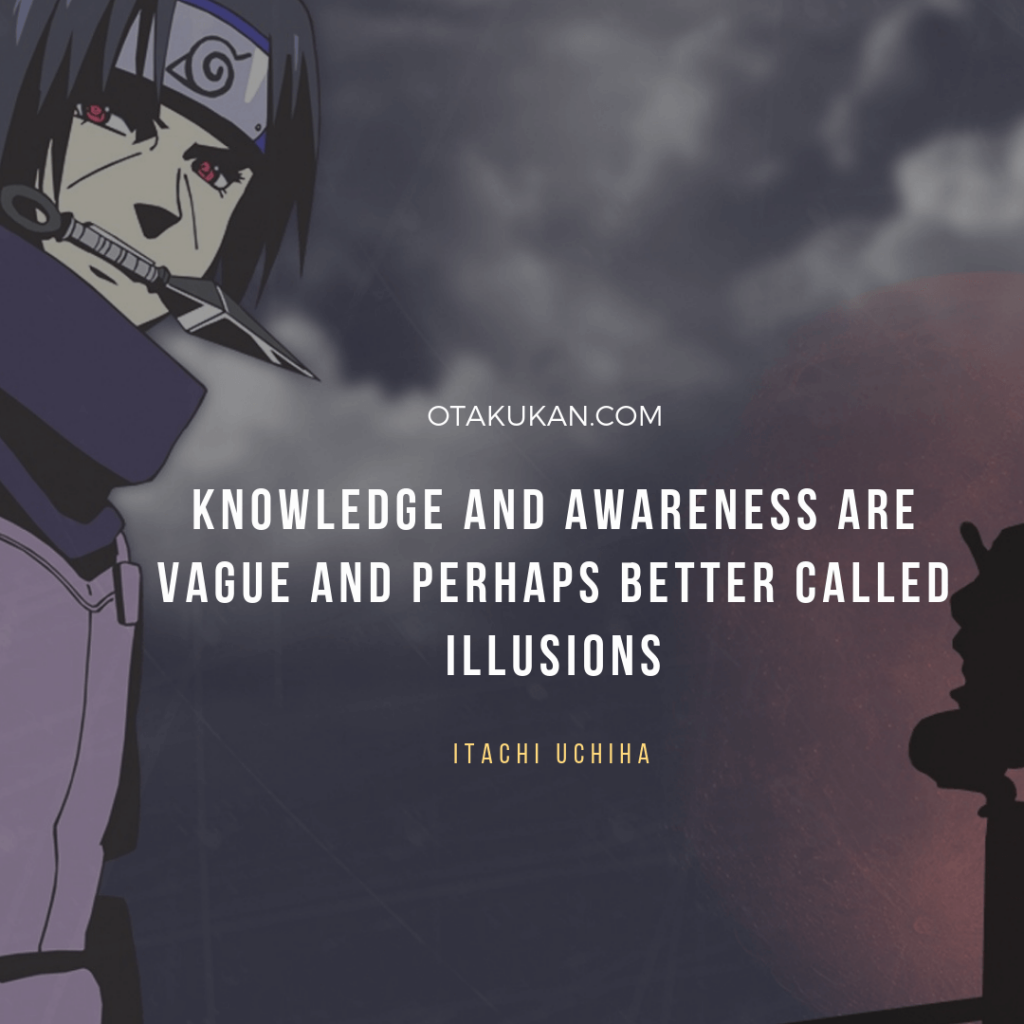 2.“You Focus on the Trivial, and lose sight of what is most important, Change is impossible in this fog of ignorance. How can we Evolve when Regulation is all we know?” 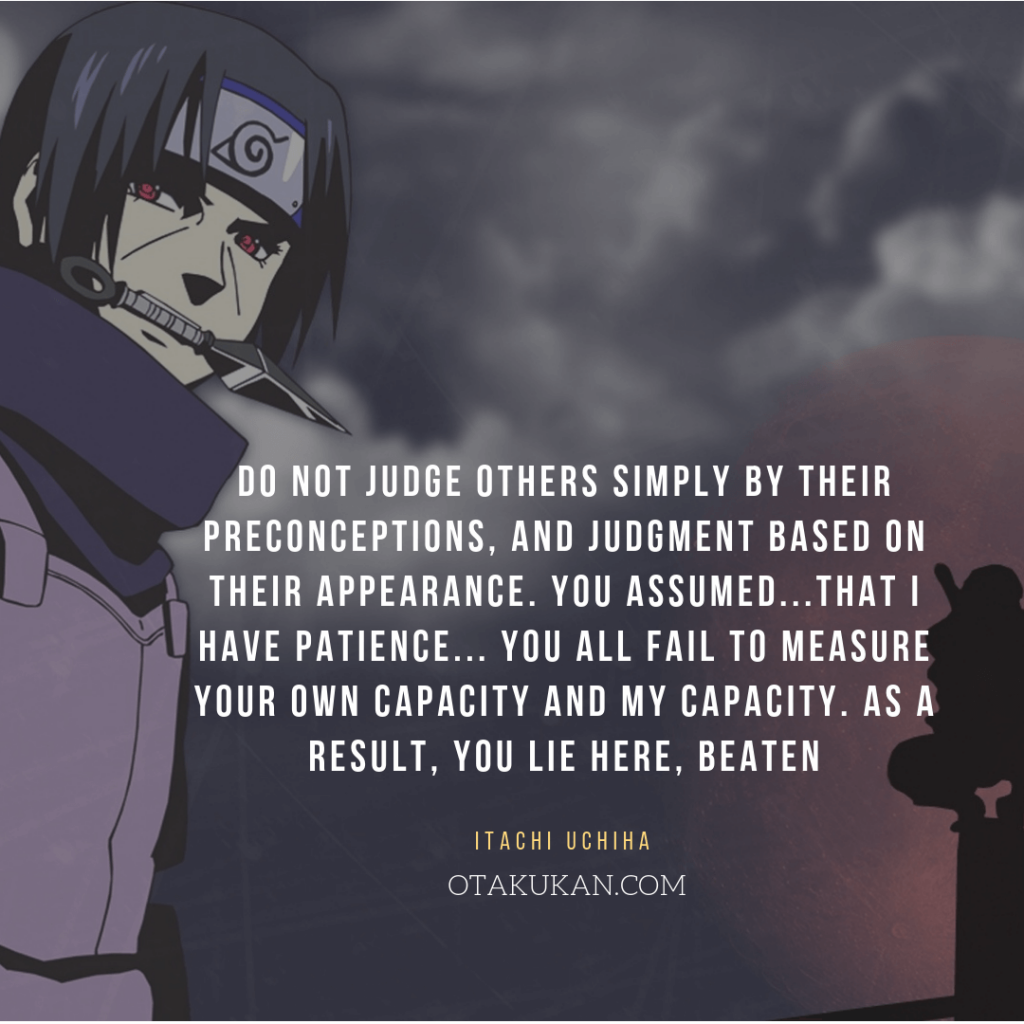 3.“Do not judge others simply by their preconceptions, and judgment based on their appearance. You assumed…that I have patience… You all fail to measure your own capacity and my capacity. As a result, you lie here, beaten” 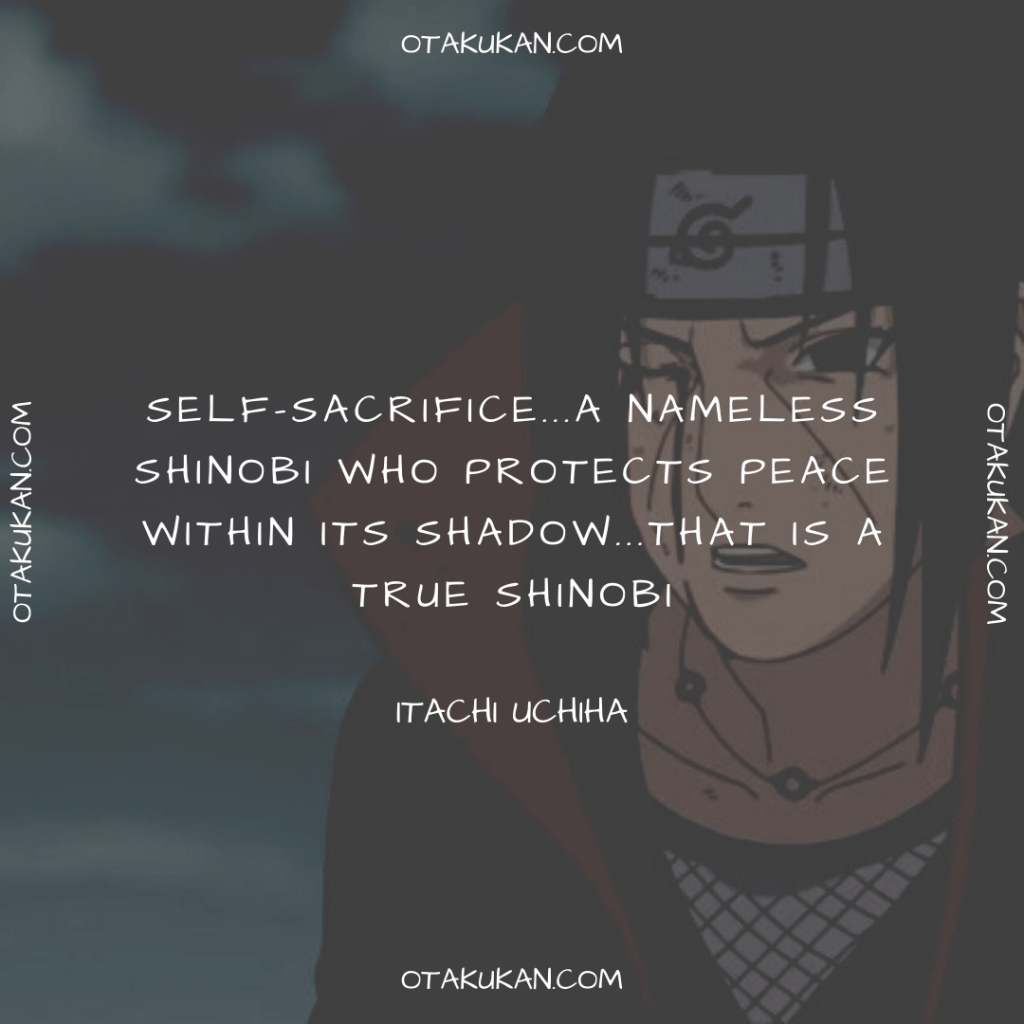 4.“Self-sacrifice…A nameless shinobi who protects peace within its shadow…THAT is a true shinobi…”  -Itachi Uchiha 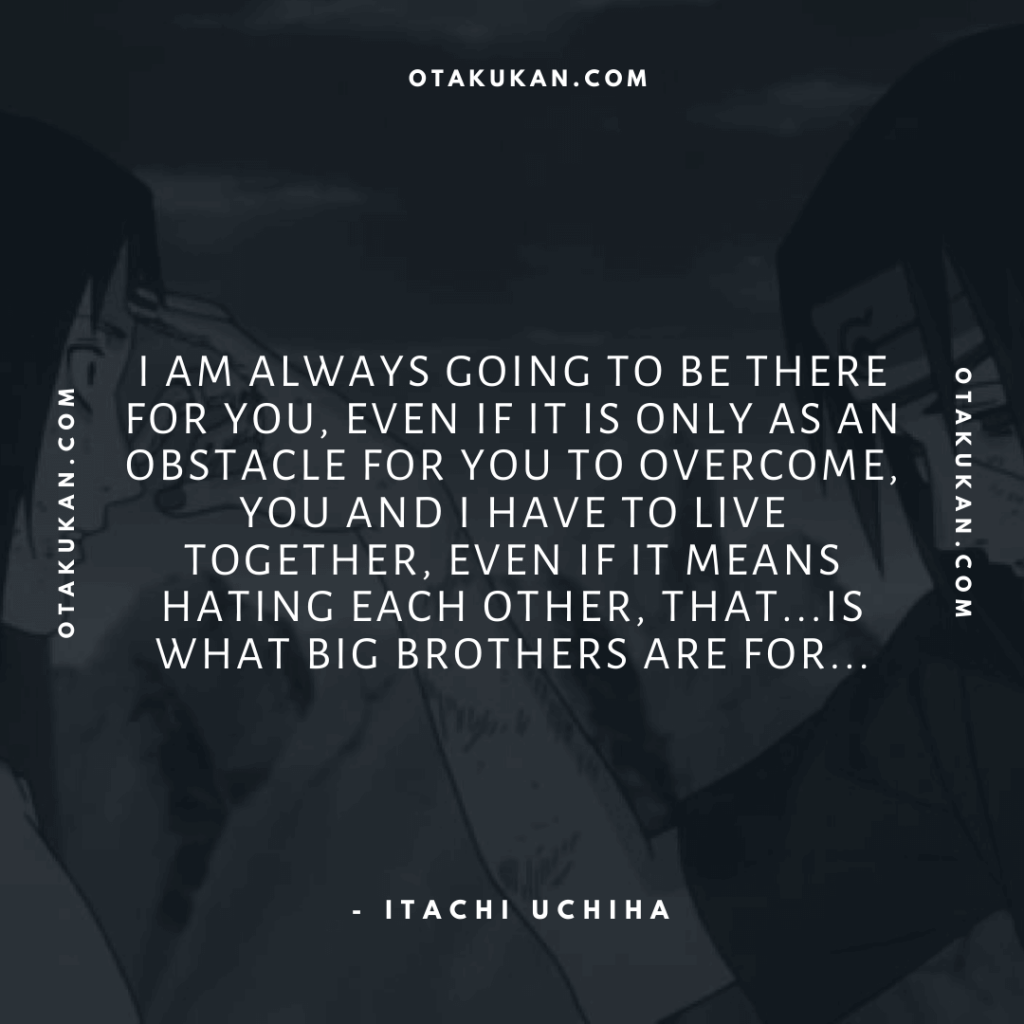 5. “I am always going to be there for you, even if it is only as an obstacle for you to overcome, you and I have to live together, even if it means hating each other, that…is what big brothers are for…”

6.“People live their lives bound by what they accept as correct and true. That’s how they define “reality”. But what does it mean to be “correct” or “true”? Merely vague concepts… Their “reality” may all be a mirage. Can we consider them to simply be living in their own world, shaped by their beliefs?”       – Itachi Quotes About life 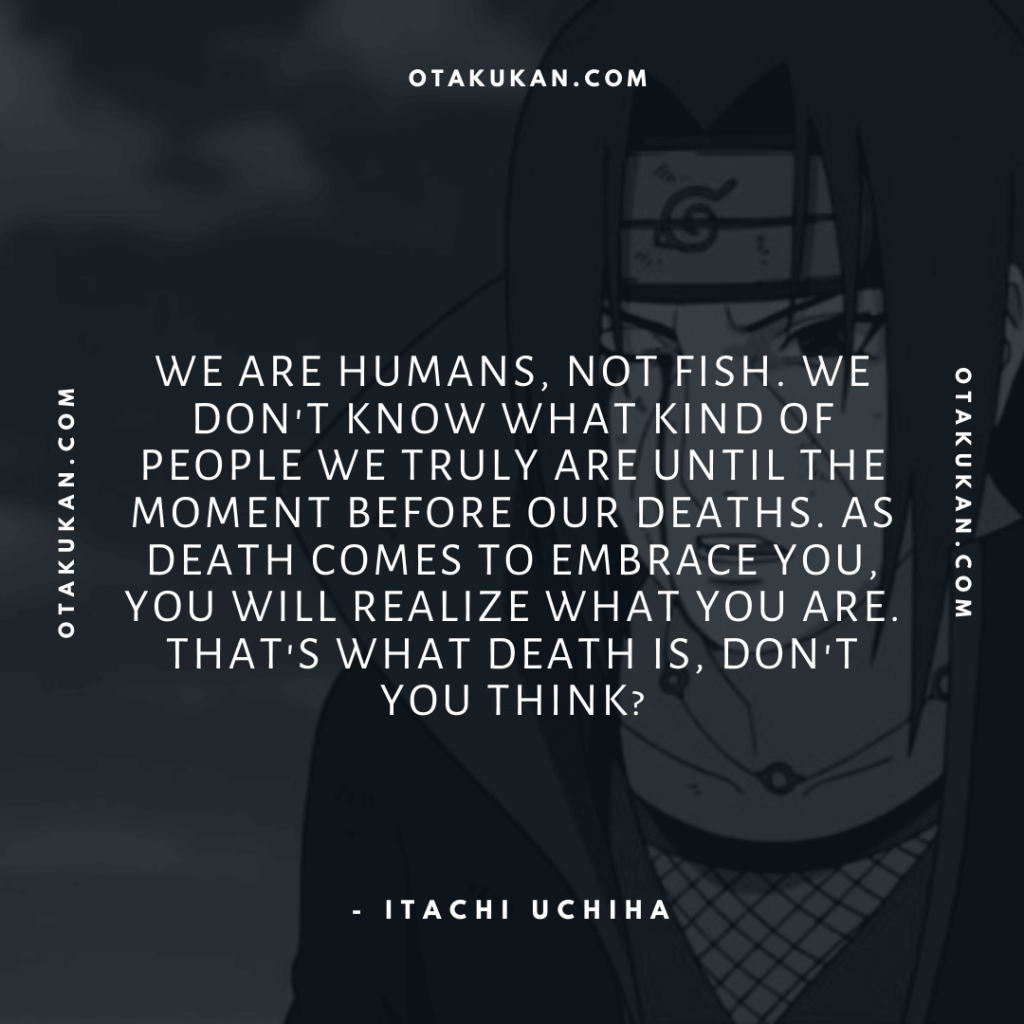 7.“We are humans, not fish. We don’t know what kind of people we truly are until the moment before our deaths. As death comes to embrace you, you will realize what you are. That’s what death is, don’t you think?”     -Uchiha Itachi Quotes 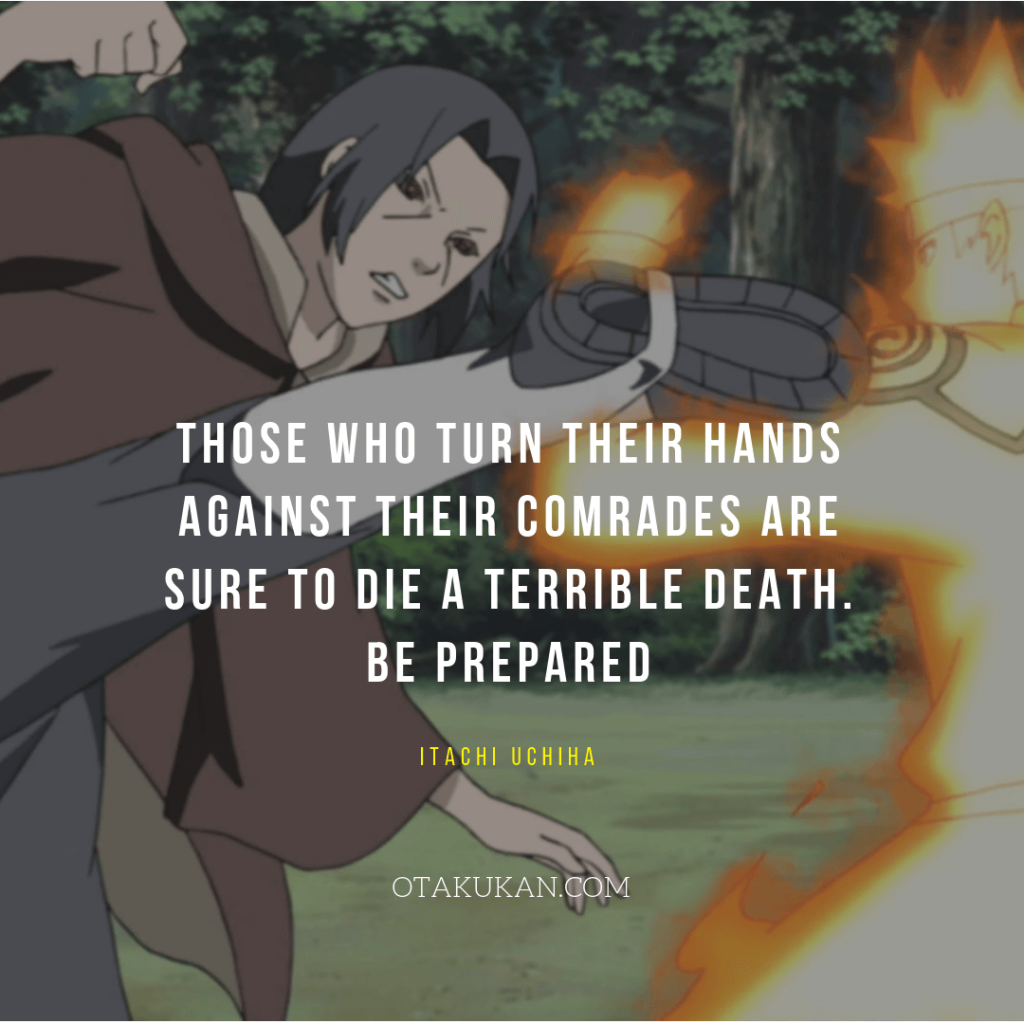 8.“Those who turn their hands against their comrades are sure to die a terrible death. Be prepared.” 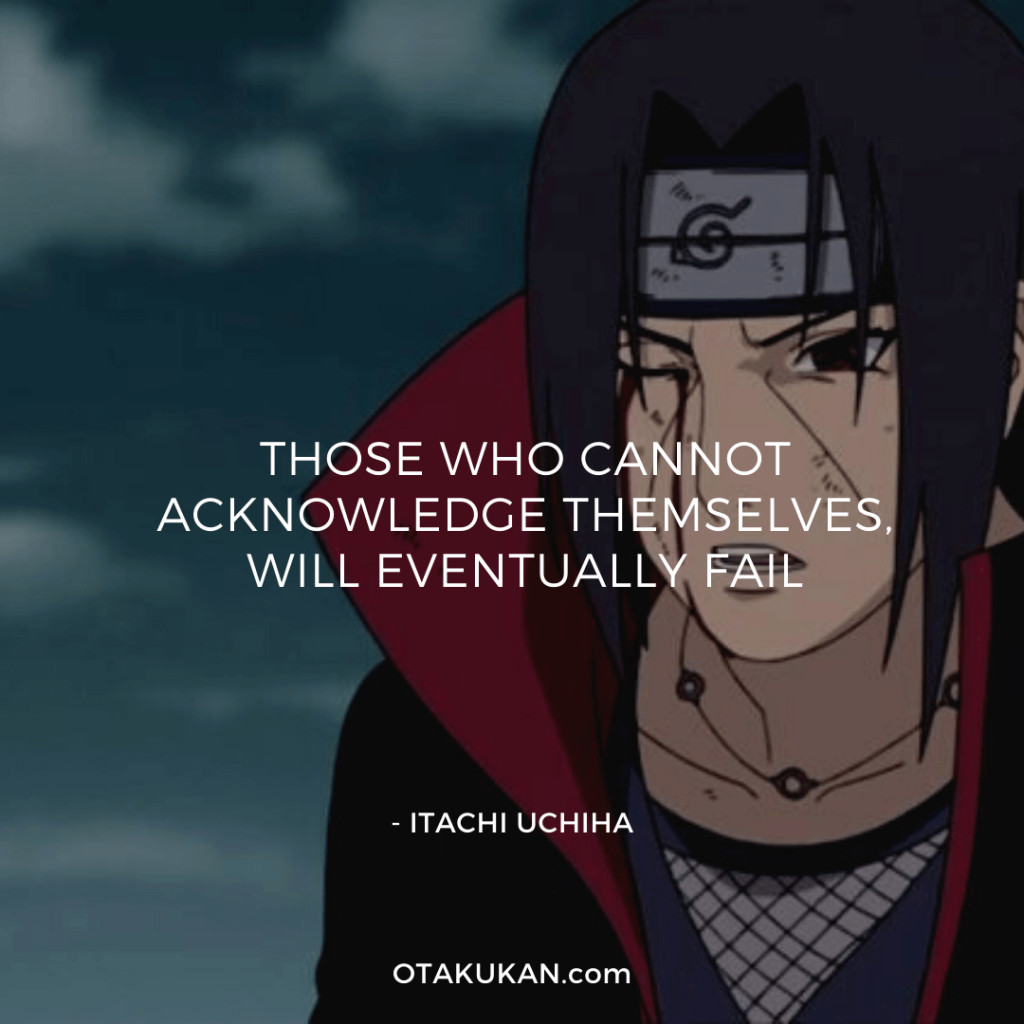 9.“Those who cannot acknowledge themselves, will eventually fail.”   -Quotes By Itachi Uchiha 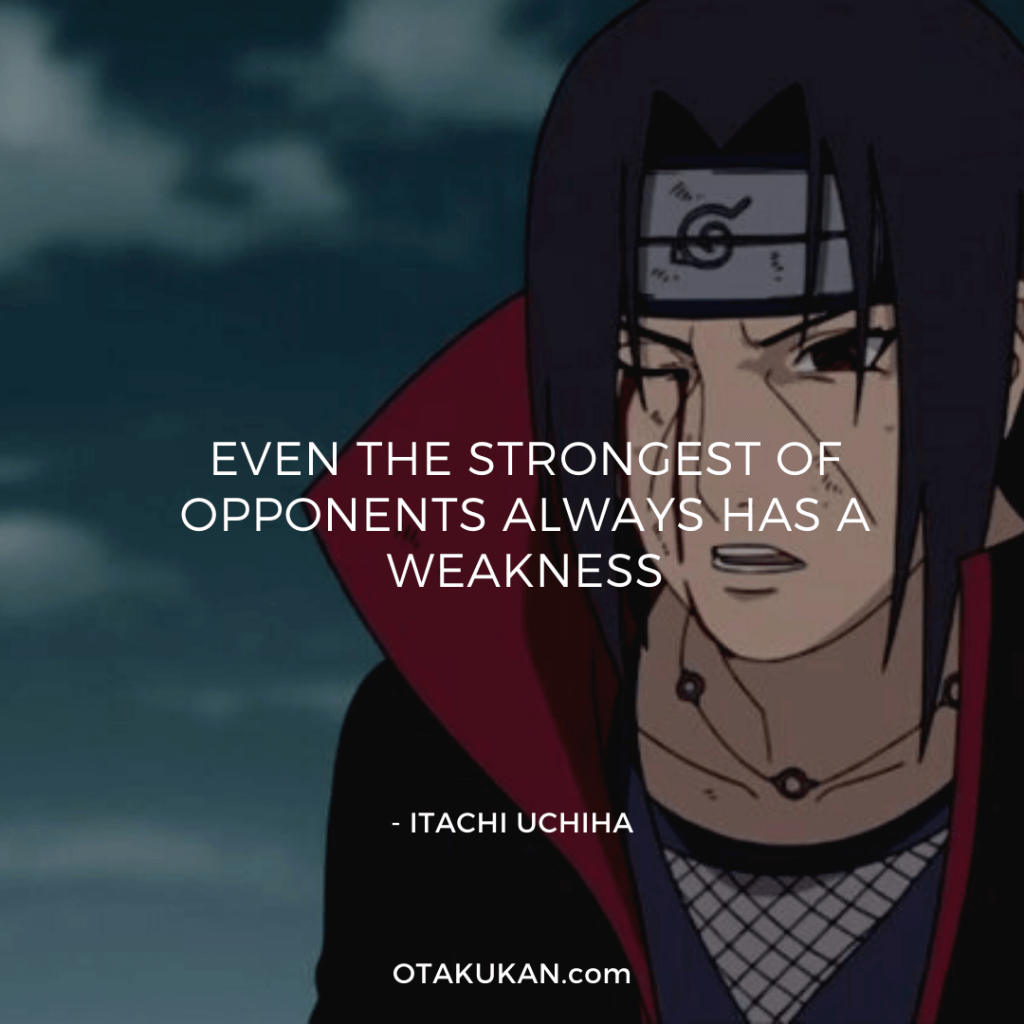 10.” Even the strongest of opponents always has a weakness.”

11.”Those who forgive themselves and can accept their true nature… They are the strong ones!”

13.“You’re such a child. You talk of nothing but pipe dreams… there are times when people must make painful choices.”

14.“Don’t cry, Sasuke. Your big brother is here to protect you, no matter what happens.”

15.” No single thing is perfect by itself. We’re born to attract other things to compensate for our lack.”

16.” The village has its dark side and inconsistencies, but I’m still Konoha’s Itachi Uchiha.”

17.“Growth occurs when one goes beyond one’s limits. Realizing that is also part of the training.”

These are some of the Best Itachi Quotes About Life he said in Naruto And Shippuden Series. Let us know If we have missed any.