Byakuya Kuchiki is one of the main characters of Bleach. He is Captain of the 6th Division in the Gotei 13. His lieutenant is Renji Abarai. Byakuya is married to Hisana Kuchiki, who died of a disease some time ago.

Byakuya appears very cold and arrogant, but he is very kind-hearted. He always puts others before himself and is always willing to help, even if it means putting himself in danger. Byakuya grew up in a wealthy family and was groomed to be the head of the Kuchiki clan.

One of Byakuya’s most defining traits is his immense pride. He always tries to maintain a stoic demeanor and acts like he doesn’t care about anything or anyone. However, there are times when his emotions do get the better of him, and he can’t help but show how he feels.

Despite his cold exterior, Byakuya is a very compassionate person. He cares deeply for his friends and family and would do anything to protect them. He also has a strong sense of justice and will always fight for it. So let’s Check out some of the best Byakuya Kuchiki Quotes.

1. Put away your sword, and you shall live…unless you still dream about defeating me. Did you forget, or did it just never occur to you…that I have Bankai as well?” – Byakuya Kuchiki

2. Something as useless as emotions; I never had them. 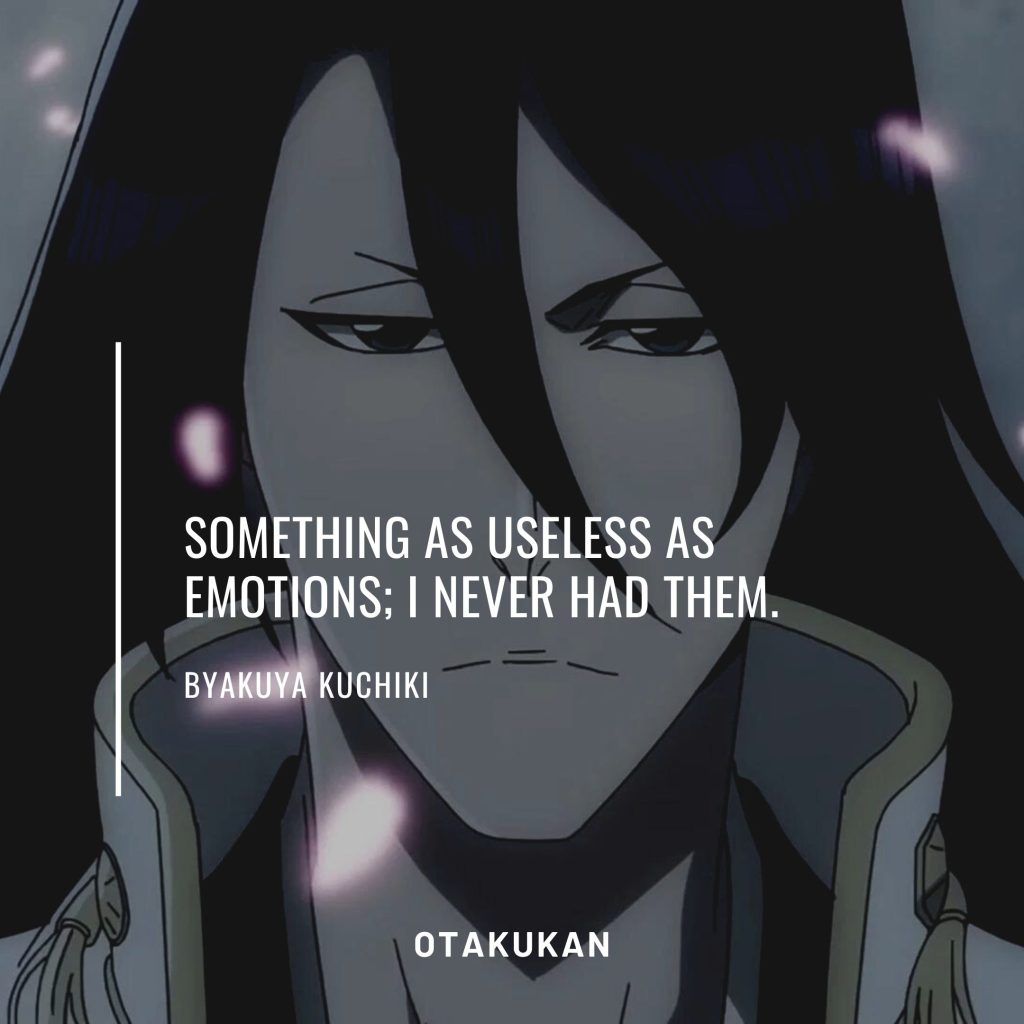 3. You and I, our levels are as distant as the earth from the heavens. Must I spell it out for you? I have discarded my left arm discarded my left leg, and yet even then, I have not nearly lowered myself to your level.   – Byakuya Kuchiki.

4. Sovereignty means nothing in front of me. – Byakuya Kuchiki Quotes. 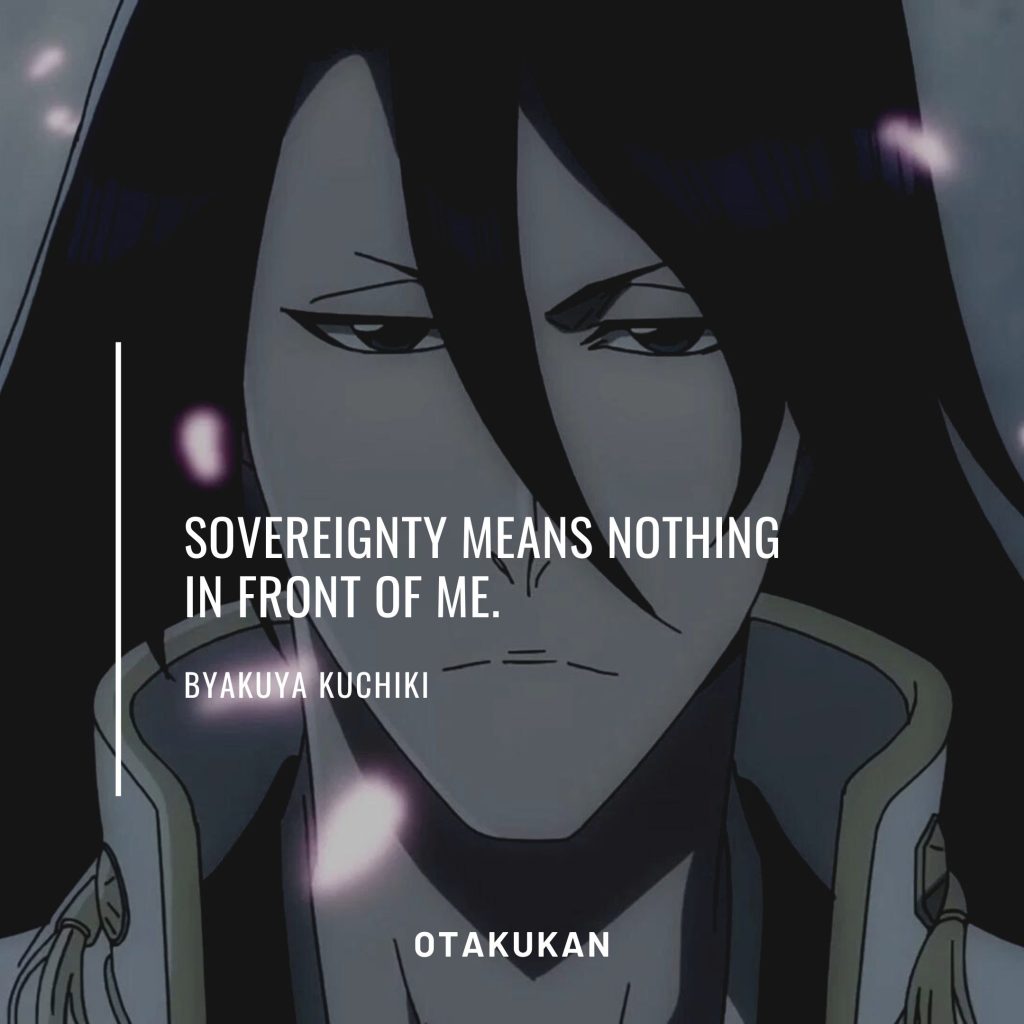 6. I don’t remember saying I would kill you because I’m a Soul Reaper. The reason I am killing you is simple. It’s because you aimed your blade at my only pride.” – Byakuya Kuchikiv

7. I… Despise the way you fight. Without ever lifting your own hand… To steal bonds of camaraderie and torture opponents is the height of cowardice. It is a lack of shame deserving of death. I am here. Strike me down. I shall kill you and cast you aside… Before you finish swinging your blade.” – Byakuya Kuchiki

8. It is a thousand years too early… for you to become worthy enough to die by my Bankai. – Byakuya Kuchiki 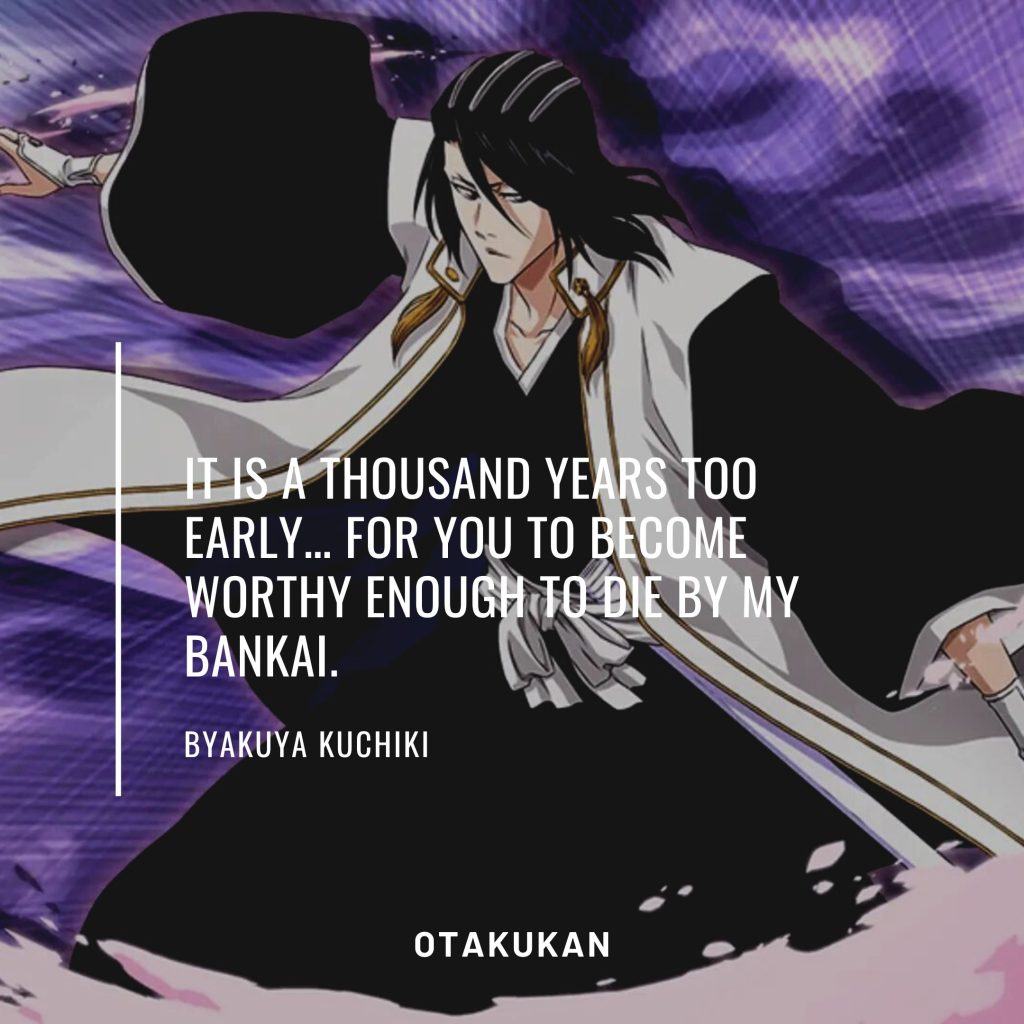 9. Control”… you say? When you stand before me… that word holds no meaning. Bankai. Senbonzakura Kageyoshi.”

10. The arrogant one are you, Espada. But rest at ease. The reason for your loss is not due to that arrogance. It is simply due to a difference in power.” – Byakuya Kuchiki 11. Well done. That time, your fang definitely touched me.

12. Be proud as someone who can still retain the shape of a body after being struck by this power. 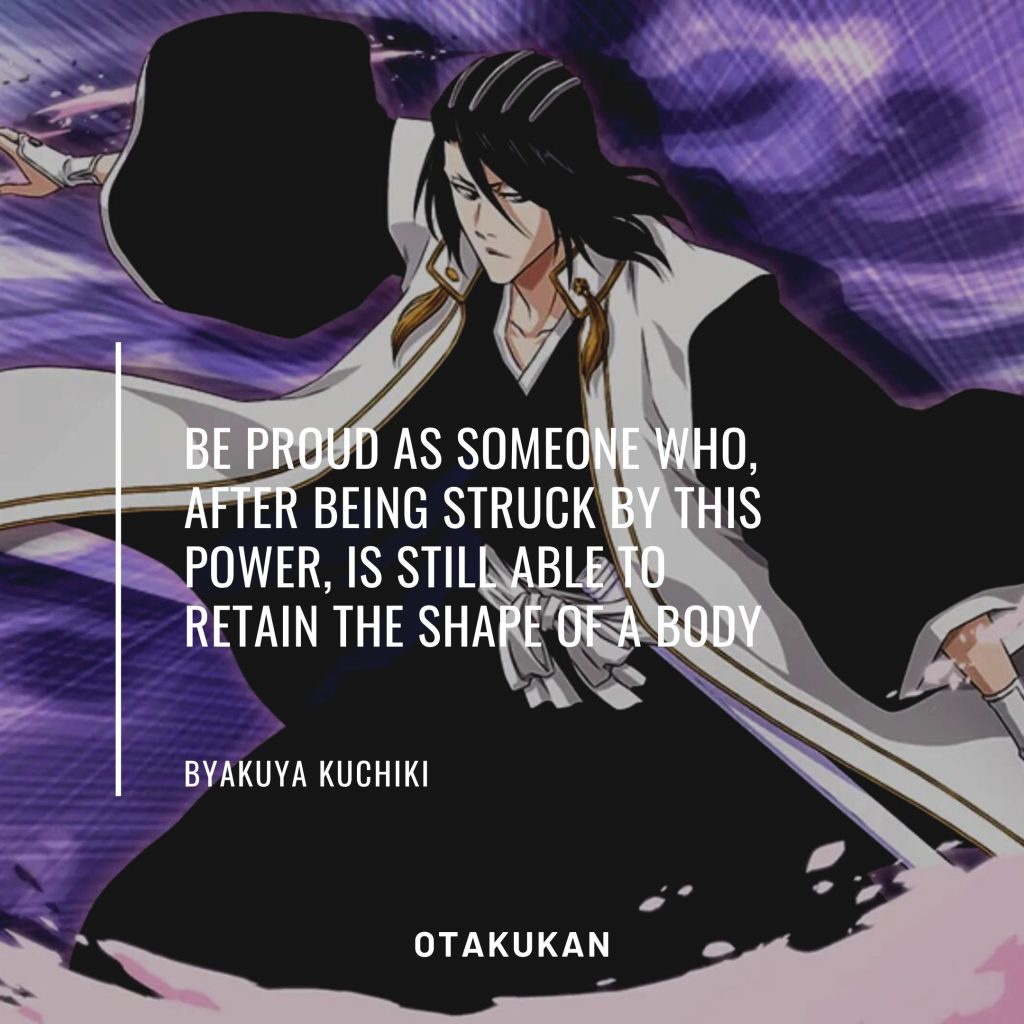 13. The curtain that falls down at the end shall be pulled down by the blade of my sword.

14. Remember that a sword held by someone who is about to die… will never be able to protect anything.

15. The Kuchiki clan is one of the four noble houses. We must set the standard for all Shinigami. If we do not abide by the code…then who will uphold it? – Byakuya Kuchiki

16. No matter how strong a defense is, a stronger offense will always shatter it. – Byakuya Kuchiki

17. Let me tell you about the difference between you and me. It’s like the story of the monkey trying to capture the moon. However close he thinks he is to the moon, it’s still the reflection of the moon in the middle of the lake. No matter how he struggles to capture that “moon,” he inevitably sinks to the bottom of that lake to no avail. You will never reach me. – Byakuya Kuchiki.

18. The fact that you consider yourself an equal to me is being arrogant in itself. – Byakuya Kuchiki. 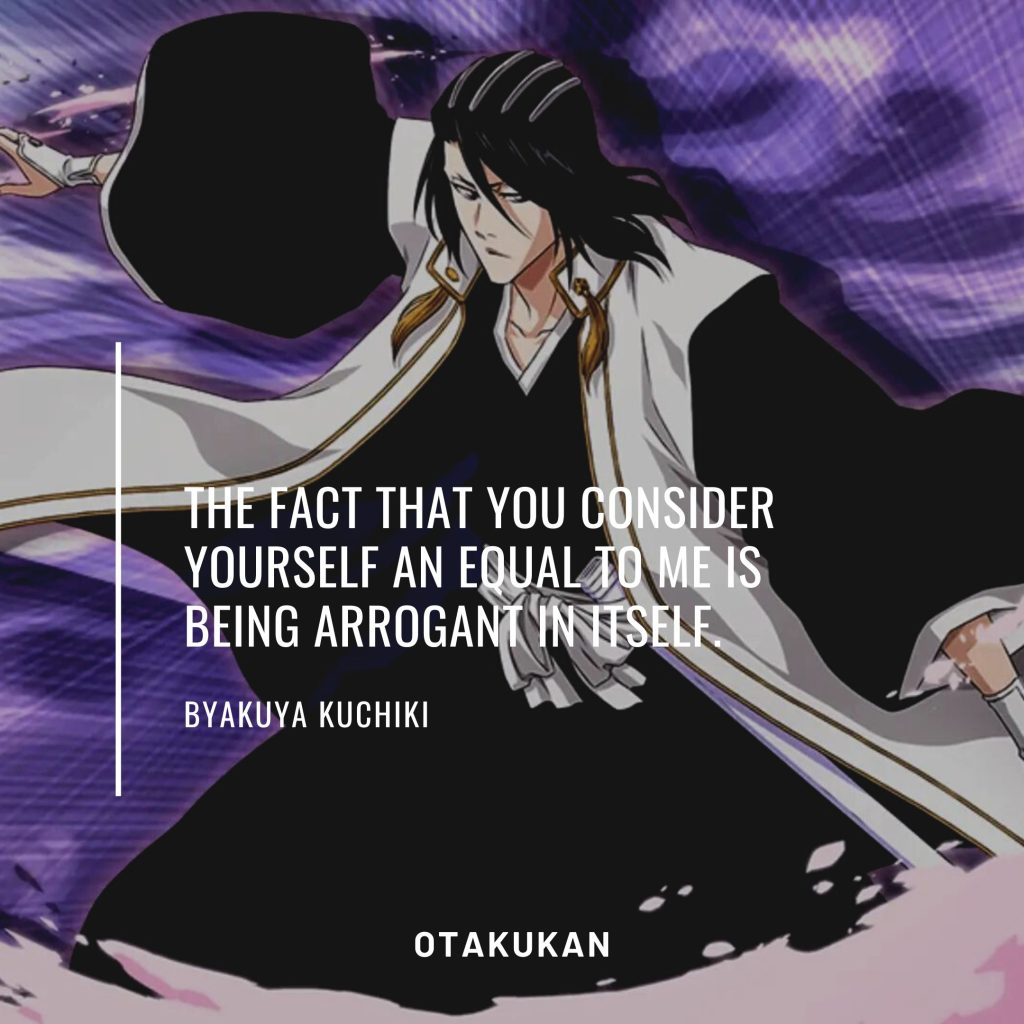 19. What is that? Are you saying that this small thing is a Bankai? Isn’t it just the sealed form of your zanpakutō? I see—first, the execution, and now Bankai. I can see that you enjoy treading on our pride. Very well, then. I will carve into your body…The punishment for injuring our pride!