Jiraiya, the Perverted Sage, was one of the ninjas that made the slightest sense in the word’s original sense. Noisy and loud, he attracted attention wherever he went. And he is quite possibly the most beloved character on the show.

But behind all that charisma was a powerful ninja. One of Konoha’s Legendary Three. A shinobi capable of facing the mighty Pain and nearly winning. And all this power came from his enormous knowledge of techniques such as:

Jiraiya’s Jutsu and Techniques in Naruto 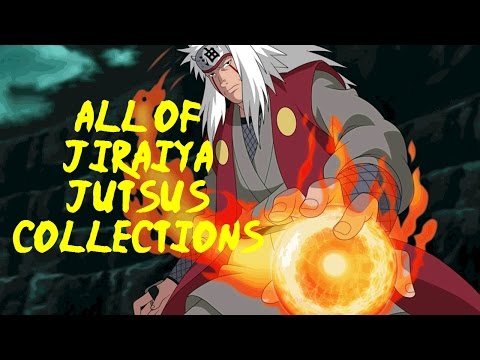 This Jutsu is a counterpart to removing sealing jutsus of the same power. In the anime, Jiraiya used it to remove the Five Elements seal placed by Orochimaru on Naruto.

A seal is used to suppress the wearer’s chakra. It can prevent the target from using their chakra and prevent that chakra from being stolen by others.

This Jutsu is a sealing of the effects of a technique into a specific role. In this case, Jiraiya uses it to seal flame techniques — even capable of sealing Amaterasu’s black flames.

The user concentrates chakra into their fingertip to generate enough heat that they can write on various surfaces, including frog skin.

This technique uses chakra to modify the metabolism of hair creation to accelerate hair growth and make them stiff. Hair can be used to restrain opponents or for direct attacks.

The user wraps their body in their own hair, which now takes the form of countless sharp needles. The chakra gives this shape and hardness to the strands of hair, similar to metallic weapons. It can be used as a form of protection or counterattack.

It is the throwing of the Jizo Needles offensively.

Summoning techniques are space-time manipulations where the summoner can transport animals or people long distances. The invocation requires a signed contract with the contractor’s blood and can only be performed if he makes a small blood sacrifice and has enough chakra at the time of the invocation.

Jiraiya, however, has access to virtually all of Mount Myoboku’s toads, which have a variety of uses.

Hiding in a Toad Technique

Jiraiya summons a special diving frog from Mount Myoboku and hides inside it in its stomach. The toad can then freely dive into fresh water, which is useful for infiltrating enemy camps near rivers or lakes.

This Jutsu invokes a small gourd-shaped frog whose stomach is used to imprison a captured victim.

This technique invokes just one organ: the esophagus of a large fire-breathing toad from Mount Myoboku. The toad’s interior is highly flexible and adhesive, not allowing opponents to move or execute techniques freely. The user controls the shape of the esophagus and can expand and contract it in any direction.

It is the summoning of a Toad Loja, a toad with the ability to transform an entire building. Once one or more people enter the building, it reverts to its small form and traps the target in its stomach.

Bring Down the House Jutsu

This Jutsu is summoning a giant toad in the air the opponent, causing him to fall with immense violence.

Sage Mode is a state that can be activated by balancing chakra with natural energy, creating senjutsu — a more potent form of chakra. After gathering enough natural energy, the user can use it to increase the potency of their techniques, as well as their physical abilities.

Natural chakra cannot be seen or felt by someone who has not been trained in senjutsu and allows access to certain unique techniques.

It is a unique fighting style for those who have mastered Mount Myoboku Toad Sage Mode. The senjutsu chakra used in Sage Mode increases the user’s strength, stamina, durability, and reflexes.

Not only that, the manifestation of natural chakra can extend beyond the user’s body, creating an invisible “aura” that can hit opponents even when the physical blow has been deflected or blocked.

The user converts their chakra into a sticky oil and spits it out at the opponent, limiting their movement. This oil can also be easily ignited for Fire Style techniques.

Collaborative Jutsu between Jiraiya, Shima, and Fukasaku. Jiraiya hurls toad oil at the same time, the toads use nature transformations for the Fire and Wind Style, enveloping the opponent in thousands of degrees of boiling oil.

The user takes control of a victim’s body and mind by placing the chakra in their shadow. At the same time, the user of this Jutsu makes his body as flat as possible, taking the form of a shadow, where he maintains that control for as long as he can hold his breath.

The user creates a spherical barrier that can expand beyond their proximity. The user starts to detect anything that moves inside that sphere.

Jiraiya can turn an opponent into a toad by touching their forehead. This technique is used as an interrogation technique, where an enemy, upon seeing a companion transformed into a frog, gives in to pressure. What comes next is the “frog chorus”, where enemies chant the desired information.

Jiraiya can create corporeal clones of himself, with his chakra split evenly between the copies. Each clone is capable of using techniques separately and are dispersed when dispelled on their own, by the original user, or being hit by “lethal” wounds. All information learned and experienced from the clones is acquired by the original after the clones are dispelled.

This technique allows the user to turn invisible temporarily. Jiraiya created this technique to spy on girls taking a shower without risking getting caught. There are no images of this technique, as you might imagine.

It is the temporary interruption of the circulation of chakra, internal or from another person, to cancel the influence of a genjutsu.

Invented by the Fourth Hokage, this Jutsu is chakra shape manipulation at its highest level, generating a sphere of pure energy capable of grinding anything that comes into contact with the vortex.

It’s the version where you simultaneously use both hands to create two Rasengan.

A larger version of the common Rasengan.

A much larger and more powerful version of the Rasengan was created with natural energy. Its formation is much faster than that of the common Rasengan.

With this Jutsu, the user can expel a large, concentrated amount of water from their mouth.

The user expels a ball of burning oil from their mouth, creating one or more fireballs toward the opponent.

A more powerful version of Fireball was created with Sage Mode senjutsu.

A collaborative jutsu, where a giant toad uses toad oil projection, and Jiraiya ignites it, creating a flamethrower effect with far greater power and range than a common fire-style Jutsu.

The user creates a fire dragon and uses it to attack the opponent.

The user spits fire along cables, wires, or any long object — such as a line of enemies or a tree — to direct the flames toward a specific target.

The user changes the surface of the ground beneath the enemy, creating a swamp capable of sinking them. The mud of this swamp is infused with chakra, making it impossible for those trapped to escape.

This Jutsu is the creation of a solid wall of earth from mud expelled by the user or already in the environment.

The user shapes the chakra around them to create rocks and blend in with their surroundings.