Netflix has released the official trailer for The Seven Deadly Sins: Fury of Edinburgh – Part 1, so you can see some of its fight scenes. You might need to grab a nap time afterward, though.

The trailer for The Seven Deadly Sins: Fury of Edinburgh Part 1 highlights that the movie will be released on December 20.

Fourteen years have since the Kingdom of Lyons ended demonic possession by defeating the Demon Clan. However, Prince Tristan faces a problem: he can’t control his two great powers. On one side is the Demon Clan power inherited from his father, Meliodas. On the other, the Goddess Clan’s power was inherited from his mother, Elizabeth. When Elizabeth is threatened with death, Tristan flees to Edinburgh, where a former Holy Knight guards a castle…What will be this knight’s intentions?

Fate has begun to turn and carries with it even the Seven Deadly Sins.

This is Nakaba Suzuki’s original manga series, The Seven Deadly Sins. It follows the story of a princess Elizabeth who lost her country to the Holy Knights after they took over in a revolution.

Elizabeth sets out in search of the Seven Deadly Sins, a group of knights who had defended their kingdom ten years ago and disbanded after being accused of plotting against the kingdom. The Holy Knights said these Seven Sins were dead, but Elizabeth finally meets their leader: Meliodas. 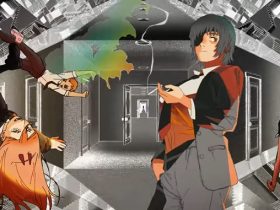